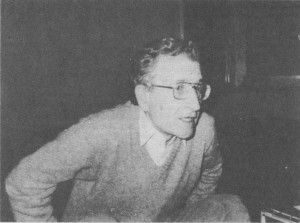 This very brief interview was obtained immediately after Noam Chomsky arrived in Columbia, Missouri to deliver a lecture on “The New World Order” on April 1, 1991. Unfortunately, when taping began in the middle of our conversation, Noam announced that he had to leave in 5 minutes, so any plans for a more organized and extensive interview had to be scrapped. Anarchy magazine staffers Lev Chernyi, Toni Otter, Avid Darkly and Noa participated in the discussion. This is what we talked about once the recording began – as Noam answered a question regarding his perception of North American anarchists.

Noam Chomsky: …I think if you counted up the number of people who would regard themselves as involved or sympathetic you’d get a pretty large number, but this doesn’t necessarily mean much, because the connections are pretty weak.

Lev Chernyi: I was curious if you try to any extent to keep up with the anarchist press in the U.S. or North America?

Noam: Yes, I guess I subscribe to most of it – more out of duty than anything else I guess.

Lev: Do you ever read Fifth Estate, for example?

Lev: Do you have any sympathy for their anti-civilization perspective?

Noam: Not a lot. I mean I’ve always felt much more attuned with the parts of the anarchist movement that were interested in and took for granted the existence of industrial society and wanted to make it free and libertarian. So at least that’s why I’ve always been inclined much more toward the anarcho-syndicalist tradition. I don’t think that there’s anything else that has any real relationship with ongoing life. Something’s got to happen to the 5 billion people in the world. They’re not going to survive in the Stone Age.

Lev: Have you ever read anything by Fredy Perlman, by any chance?

Lev: Like for instance his pamphlet The Continuing Appeal of Nationalism? Have you seen that one?

Noam: I wouldn’t be surprised, but I don’t remember it well enough to comment on it.

Lev: Have you seen his book Against His-Story, Against Leviathan?

Noam: I saw that too, but again I don’t remember it well enough to comment. You know, the theme of Against Leviathan … I don’t understand what it means exactly. Civilization has many aspects to it. It doesn’t mean anything to be for it or against it.

Lev: To some degree it’s a question of semantics. It depends on what people are defining civilization as.

Noam: Well, to the extent that civilization involves oppression, sure, you’re against it. But then the same is true of any other social structure. You’re also against oppression there.

Lev: I’ve seen remarks of yours before in which you were speaking mostly of Western European civilization. Your remarks could sound like there might be some attempt at a critique of civilization overall, rather than thinking of everything as being within civilization and only criticizing the most hierarchical aspects.

Lev: If you’re using the term civilization as describing what’s grown up from the beginning of the city-state and the growth of the state, or counterpoising to that more primitive, primal type social structures and groups that to some extent still exist in the niches and crannies around the world, then also….

Noam: Well, which ones do you mean? Some of those are very sordid. Some of the worst forms of oppression and brutality are in pre-technological societies.

Lev: I guess one major difference is that their forms of warfare and other things aren’t set up to wreak mass destruction. It’s more of a….

Noam: That’s not true! I mean their forms of warfare can often be genocidal. Read the Bible, for example. That was pre-technological, and it’s the most genocidal book in our canon, or in existence.

Lev: I guess, what I’m also saying, though, is you’re talking about the…

Noam: These were tribes coming into the desert.

Lev: …primal or primitive societies that are on a more anarchistic side of….

Noam: Oh, I don’t know. You’ll find all kinds of things. You’ll find contemporary communities which are libertarian, and they’re right in the middle of modern industrial society.

Lev: So basically, you’re just saying that you don’t see any worth at all in pursuing a type of critique of modern civilization from the perspective of going way back to the beginnings of civilization.

Noam: You know when you go back to the beginnings of civilization you find all sorts of things. I mean what do you call the beginnings of civilization? How far back, is it the Stone Age? For example, there were thousands of years of peasant societies before the formation of city-states, before the invention of writing and so on. Well if those peasant societies are anything like the ones that we see, they’re very ugly places. Peasant societies can be quite vicious and murderous and destructive, both in their internal relations and in their relations with one another. The image of peasant societies as peaceful, friendly places is very misleading. There are some, you know, but by no means generally….

Noam: There are peasant societies that go back seven or eight thousand years, to the beginnings of agriculture.

Toni: Yeah, but let’s say tribal Europe before the Roman Empire. I mean, sure, there’s a mix of brutality and…or let’s just say if you look at the Aztecs or the Incas. Now they were relative imperialists of their time…

Noam: And they were murderous.

Toni: …and they were murderous….

Noam: Part of the reason why the Spanish explorers had such an easy time of it was that they easily picked up collaborators who wanted to overthrow Incadom.

Toni: And some of the collaborators may have been just murderous and…

Toni: …and they had probably conquered some people who were hunters and gatherers and some who were horticulturalists, and those people may have been, as you were saying, relatively libertarian in that time…

Toni: …just as now it’s a mix in terms of what culture is. It seems to me sometimes when people critique civilization they’re critiquing the growth of statist structures, of certain kinds of social structures which have grown up especially in the modern industrial age. But, you know, you can critique capitalism, but then you have to critique patriarchy, and you have….

Noam: Well, suppose it turned out that the Kalahari Bushmen were living in an absolute utopia. That’s not true, but suppose it turned out to be true. What would we…that wouldn’t tell us anything about this world. It’s a different world. I mean you have to start, if you want to be related to the world in which people live, you have to start with the existence of that world and ask how it can be changed.

Noa: OK, let’s say we start with the existence of that world. Take something like Jacques Ellul’s critique of technique in The Technological Society, where technology itself is seen as having a life of its own much like capital, which is a destructive…

Noa: Well, to the extent that technology means…in terms of Ellul’s critique, he’s saying that technology that develops much beyond a certain organic relation to its creator – much like, take the metaphor of capital being removed from human control and taking on a life of its own, then it becomes a force of domination. But technology….

Toni: Ivan Illich in Tools for Conviviality, for example, talks about a lot of the same things, it seems like.

Noam: It can, but it depends upon the social institutions in which it exists. I mean, for example, a libertarian society would want to make use of the most advanced technology there is, and in fact would want to advance it further. Take something like, take a real contemporary technology like, say, information processing technology. You know, that can be used for oppression; it can be used for liberation. I mean, it could be used, for example, as a device for having real … take, say, self-organizing in the work place … I mean that is the device that might make it realistically possible for working people to have real time information to enable them to take part democratically in controlling the work place and production in a serious way. Without that technology….

Toni: But what it meant for me was that our workload increased four times. They fired bookkeepers. They incorporated that into my…

Lev: To a certain degree you could. But do you have any way of considering how all the mining and factory work that goes into creating that type of technology fits in? Do you think that there could be a libertarian society that would be possible where people would still participate in the type of work that would be necessary, the type of assembly-line work….

Noam: But that’s just what advanced technology ought to get rid of. Most of the assembly-line type of work could be eliminated with the appropriate use of high-technology, for example robotics. I mean that could eliminate a lot of the work that human beings shouldn’t do.

Lev: Do you see no problem at all with that kind of technology – robotics on a mass scale – being even more out-of-control than the situation now because…?

Noam: That’s a truth, absolutely. In a hierarchic, oppressive society robotics will mean mass destruction. But the question is, what are the institutions? Robotics itself is neutral. Robotics itself could be used to eliminate degrading labor. It could be used to oppress people. And the question is in which social institutions is it going to develop?

Lev: I guess the real question for me would be how would people really, in any direct sense, be able to control that…?

Noam: In a free society they would control it democratically. For example, take Mondragon (which isn’t a real co-operative, but it’s partially there). Suppose we have Mondragon, it still has managerial control and so on, but if we had that you can imagine in that kind of society the workforce getting together and deciding to kick out the managers in favor of worker decision-making, using real-time information that’s available with high technology and eliminating the crazy degrading jobs with robots. That’s possible. At least that would be an ideal objective to work for, and they’d want the best possible technology.

Lev: Do you see that as being a way for a society that was organized in a relatively free way to actually control the direction of how much technology was used? And that it wouldn’t just be like the technology had a momentum of its own, where it would be hard to have any real control? For instance, like the automobile. Automobiles have basically redesigned all cities in industrialized countries to their needs….

Noa: But, one thing you’re saying that I can’t buy is that technology is neutral, because technology is a historical process, the development of technology. So automobiles were developed as a mass business, say by Henry Ford or whoever, to serve certain needs in a certain way. In other words there’s a political agenda behind the very existence of the automobile. And that agenda leads to pollution of the earth. It leads to isolation of people from one another.

Avid: Well it seems that if people had a loyalty to environmental concerns then we could put a brake on technology in terms of…

Noam: Not only that, but the only thing that can possibly resolve environmental problems is advanced technology….

At this point the interview was ended as Noam left to prepare to meet with the organizers of his lecture and other planned events at the University of Missouri. The group publishing Anarchy magazine, C.A.L., was one of the many co-sponsors for Chomsky’s appearance at the University. The interview originally appeared in Anarchy: A Journal of Desire Armed #29, Summer 1991, pages 27 & 29.